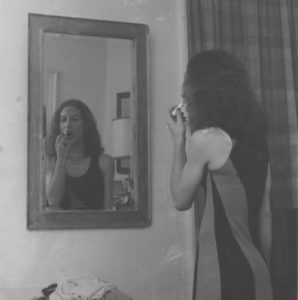 That hot summer night in 1974, I was standing on the corner of 13th and Locust streets in Center City Philadelphia. It was becoming a habit. The intersection was well-known for sales transactions. The world’s oldest kind.

I was living in drag. I even went to work at a record store in South Philly in outrageous outfits. The owners were hippies. They thought I was trying to be David Bowie in his “Ziggy Stardust” incarnation. Glitter rock sold.

The store was located inside an old warehouse turned shopping mall. The owner tried to get me fired for inappropriate dress. Fortunately, the employees were all members of Retail Clerks and our shop steward, an amazing African American woman, wouldn’t hear of it. I think she secretly loved queens. Maybe she was a dyke. Once, when a group of black and Puerto Rican queens came sashaying into the store as loud and proud as could be, the owner tried to throw them out. Our shop steward intervened and happily waited on them. She even let one of them try on a dress in the women’s dressing room, while the owner looked on disapprovingly.

That night at 13th and Locust, I was wearing one of my favorite ensembles: hot pants, platform shoes, a shirt tied up at the waist to reveal just a bit of flesh. My hair was long, gnarled and unruly, as it always was in the extreme humidity. The temperature may have been dropping a bit that night, but not the humidity.

I was sporting face paint, but not too much: I wasn’t going for Marilyn Monroe. The most I could hope for was Bette Midler or Barbra Streisand on a bad hair day. They were my role models anyway. I was too ethnic looking for those washed-out blonde Hollywood types. A Jewish friend with similar Mediterranean features had already undergone her first nose job. There would be many more to come. I thought about it, but altering my family’s “snozzola,” as Papa lovingly called it, was not on my list of priorities. Not only would Papa have killed me, but generations of ancestors with Roman noses would have cursed me with the mala occhia (evil eye) from beyond their graves. I didn’t need that.

It wasn’t the smartest thing to be standing out there so visibly. My uncle the cop worked in that police district. He might drive by in his patrol car, though I knew he usually did the day shift. He probably wouldn’t recognize me anyway. He hadn’t seen me for a while. He certainly had never seen me in radical drag. Of course, if my faggot ass got hauled off to jail, he’d find out for sure.

I didn’t care. I hated my uncle. When I was younger and worked at Papa’s gas station, pumping gas and washing cars, he’d come around and mouth off about the “damn hippies” who were ruining the country. He’d ask me when I was going to start “acting like a boy.” As if that was something I really wanted to do.

I hated cops. The boys in blue bothered queens all the time. They hassled the gay boys, too: raiding the bars when the owners didn’t make their payoffs, stopping all of us from hanging out together at night on the streets, and arresting us for selling our bodies or having sex in the parks and tearooms. There was actually a law at the time that made it illegal for several homos to be walking down the street together after 10pm. Cops routinely stopped us and told us to disperse or they’d take us in.

They also bothered us a lot in Rittenhouse Square, the beautiful park in the center of the gay ghetto. When I was a teenager, I used to bring my $15 folk guitar to the park on clear summer nights and jam with the hippies under the stars. I wanted to be with the queens, but they were off in their own little corner where I didn’t yet feel comfortable. The cops would come through as soon as it got dark and start hassling the hippies and the queens. They also went after the gay guys who walked around in circles cruising each other. Sometimes two guys would duck into the bushes for a little grope session. In the dark they could usually get away with more.

It was sometimes difficult to work with the gay activist types. They really had a different agenda. Respectability. Fitting in. They were always saying that “gays are like everybody else.” I didn’t want to be like everyone else. Normalcy was overrated. And boring. As Oscar Wilde or Jean Genet might have said.

Some activists thought that queens like myself were giving them a bad name, that we hurt their cause. By being out there on the corner of a street known for hustlers, whores and queens or making a lot of noise in Rittenhouse Square (instead of silently parading around looking for dick), I was setting back the cause of gay rights.

If the truth be told, I tried hard to set it back. I worked on it every day. Most times, I succeeded. Like that night on the corner of 13th and Locust.

“Hey, how’s it goin’?” I heard his voice before I actually saw him. I turned. The guy was standard-issue South Philly macho. Jeans, t-shirt, sneakers. Not too tall. Talked like Rocky Balboa on testosterone.

I knew the type well from growing up in working-class Little Italy where the guys stood on the corners in tight jeans and tee-shirts. I spent many a summer afternoon staring out the window of my parents’ room fantasizing about those guaglioni (homeboys), as we called them in my mother’s southern Italian dialect.

He had nice thick eyebrows and a Roman nose. I liked the combination of olive skin and black hair. It was a turn-on even when I was a young fag staring at male classmates in Catholic school. A nun once called me out for it, telling me that if I looked at the other boys that way, people would get the wrong idea.

Except that was the right idea. From the moment I started playing with my sister’s dolls and jumping rope with her friends to the day I tried on my first dress, I had nothing to hide.

“You’re just a lonely boy, huh?” I asked, echoing the lyrics of an old ‘50s song I liked. I think it was by Paul Anka.

“Yeah, real lonely.” I could tell. As Mae West would have said: Was that a gun in his pocket or was he just excited to see me?

It didn’t take long to figure out we wanted the same thing. Lucky for both of us,  he lived within walking distance. I made it a rule not to go far. You didn’t hear much about queens getting murdered in those days (which is not to say it didn’t happen), but I still didn’t take chances. I had even stopped hitchhiking. I did it in college before I came out. Sometimes I pretended I didn’t notice that guys were coming on to me. Other times I let a guy grope me before I dashed out of the car.

When we got to his place, I was relieved to see that he lived alone. No roommate or partner to come barging in. He wasn’t the best housekeeper. No surprise there. He offered me a beer. It was years before date rape drugs were the rage, but I still made it rule number two not to accept anything to eat or drink.

Formalities out of the way, he grabbed me and tried to kiss me. I pulled away. Affection wasn’t part of the deal that night. “I don’t do that.” I paused.

“Let me get somethin’ straight. Just cause I dress like this doesn’t mean I’m passive. I ain’t here to suck dick or get fucked.” That was rule number three.

He seemed scared at first. I liked that. A butch old fag like him. Of course, I didn’t know for sure that he was queer. Could’ve been a straight guy who preferred getting sucked off by a queen. Maybe his girlfriend wouldn’t do it. Maybe she was lousy at it. Maybe he was exploring his sexuality. Guys did that even back then.

We called them “trade.” “DL” hadn’t been invented yet. When they turned violent or hostile we called them, “Neshinu.” There were quite a few Neshinus in the City of Brotherly Love.

He hesitated before dropping down.

“You know what I want,” I said in a firm voice.

He got right to it. He pawed at my pants and undies until they dropped down my legs. Then he started sucking my dick and loving it. He kept looking up at me like a puppy desperate to please his master. I started to smile. What a sight that would have been for the gay boys on the other side of Broad Street in their dark, noisy Mafia-run bars. In their view, closeted straight guys sought drag queens because they secretly wanted other men but couldn’t admit it. Gay men liked other men. Other men who dressed and looked like men. Only pure and unadulterated freaks liked queens because they were queens.

Queens knew better. We lived on the outskirts. We saw things that other people didn’t see. We were like that fool on the hill the Beatles sang about. We watched the parade of gender-obsessed people in the world with amusement. We knew it was all more complicated than dreamed of in anyone’s philosophy, even our own. The radical chic shrinks of the day only hinted at the world to come if the walls came down and people were free to invent their genders.

I got a taste of it that night. My trick was doing his job well. He was bringing me to the edge. I decided I wanted more.

They had a saying in those days: the butcher they are, the faster they roll over. Before I left that guy’s apartment, I would discover the truth of that saying firsthand.

originally published in Why are faggots afraid of faggots? edited by Mattilda Bernstein Sycamore, AK Press, 2012